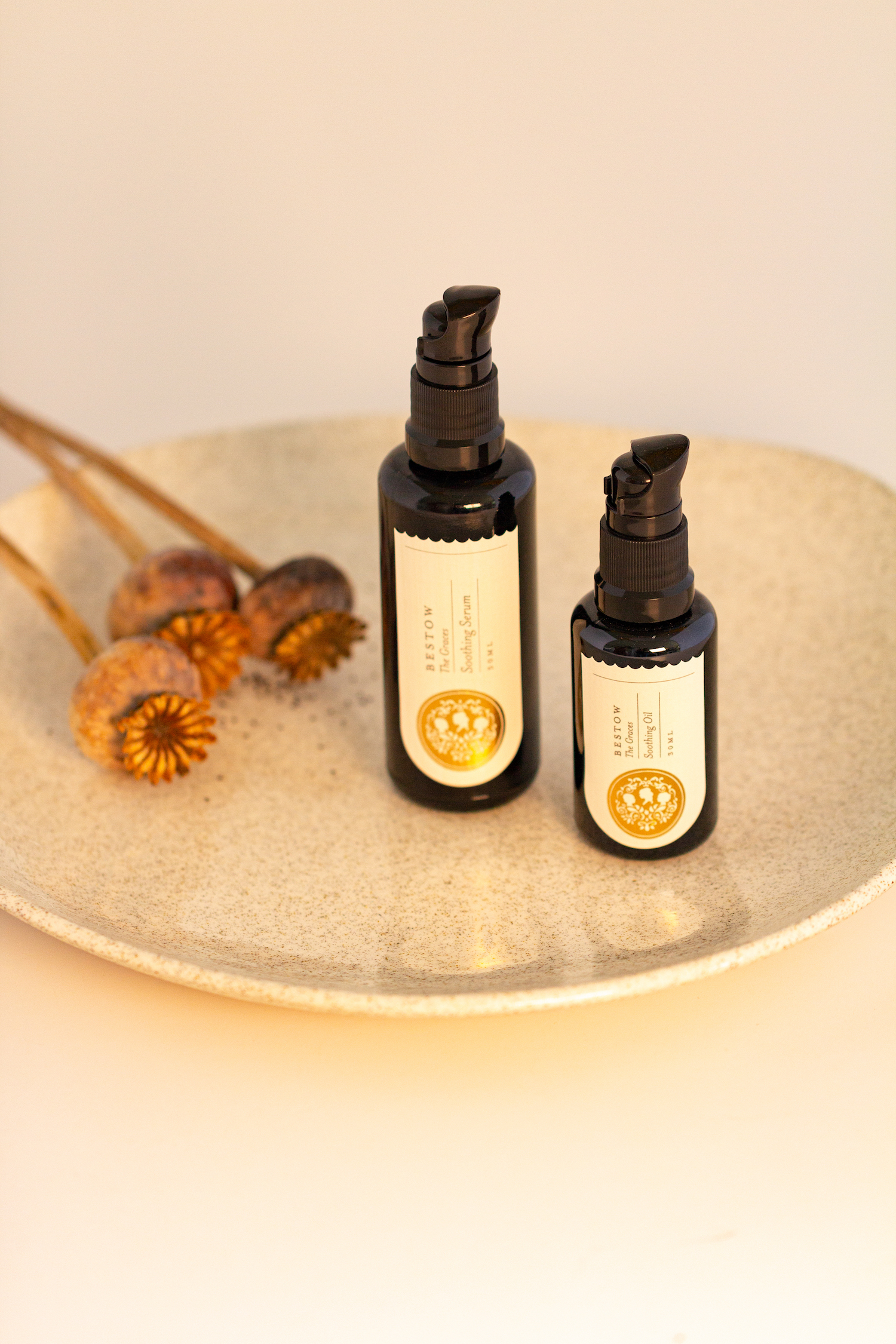 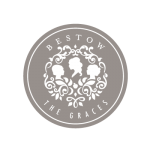 Made in New Zealand

Q. How should you treat skin that is stressed and sensitised?

Sensitised skin is crying out for help.

Many skincare products will make sensitised skin worse. Even good quality products can be ‘too much’ for reactive skin.

The bad news: Sensitised skins have a compromised skin barrier. The skin barrier is the skin’s first line of defence. When it breaks down, toxins can enter the deeper layers of the dermis. This can set up inflammation and sensitivity. A damaged skin barrier also allows moisture to escape. The result? Dehydrated skin that feels tight and dry.

The skin is capable of repairing and rebuilding the skin barrier – with the right care. Sensitised skin requires pure products and a very simple skincare routine. 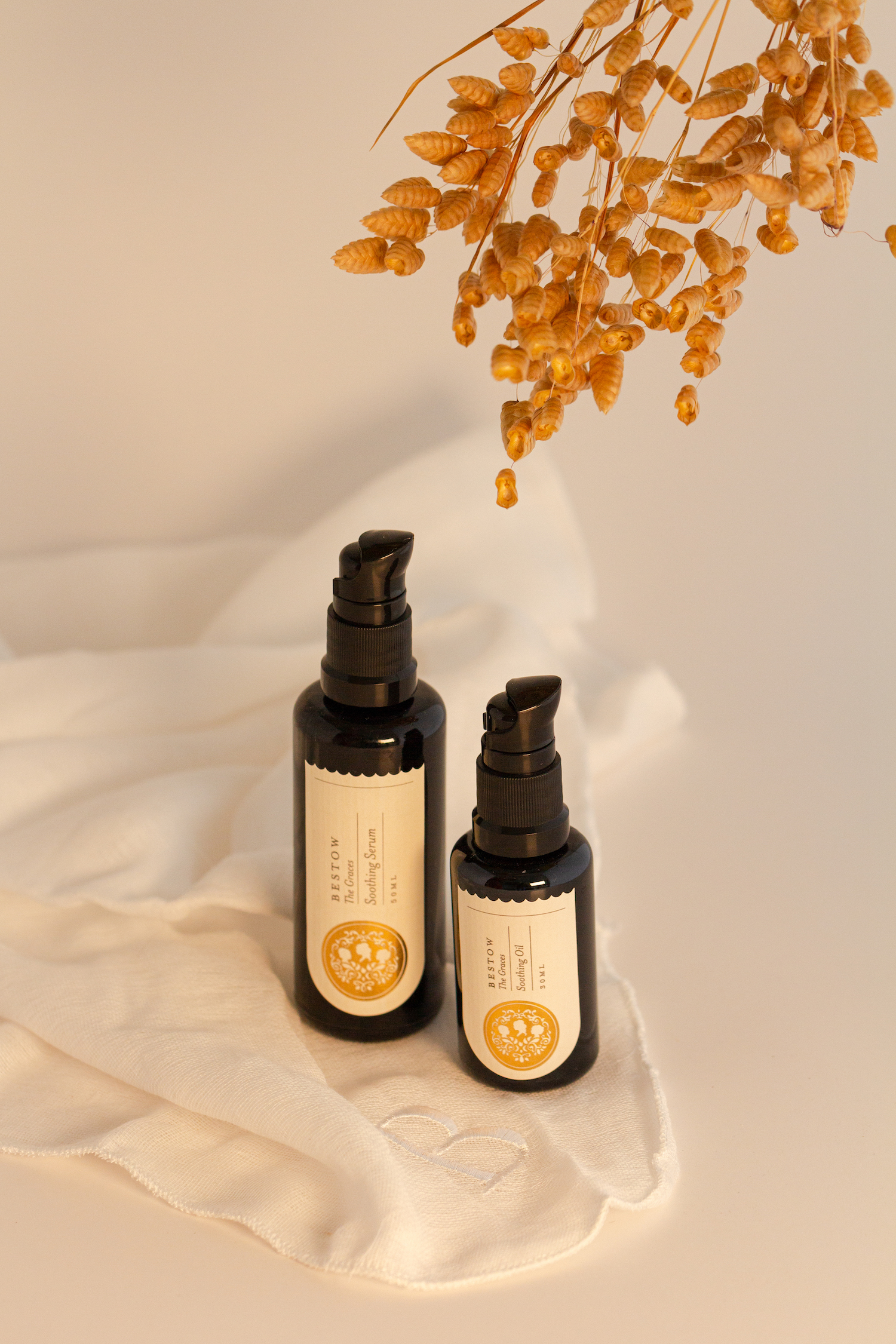 What grace can we bestow on sensitised skin? 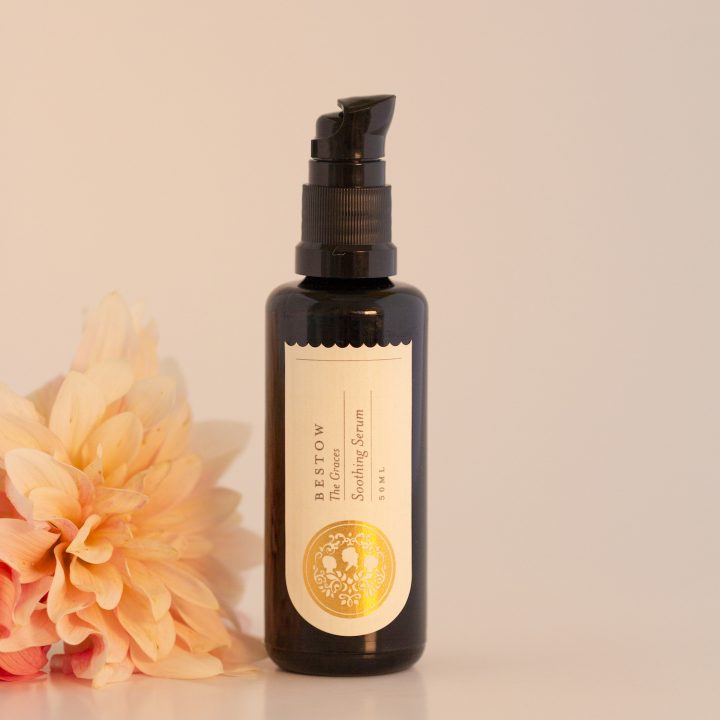 The Graces Soothing Serum offers gentle plant therapy to soothe, repair and strengthen sensitised skin. It features calming botanicals to help the skin barrier to repair itself. This lays the foundation for soft, smooth, beautiful skin. 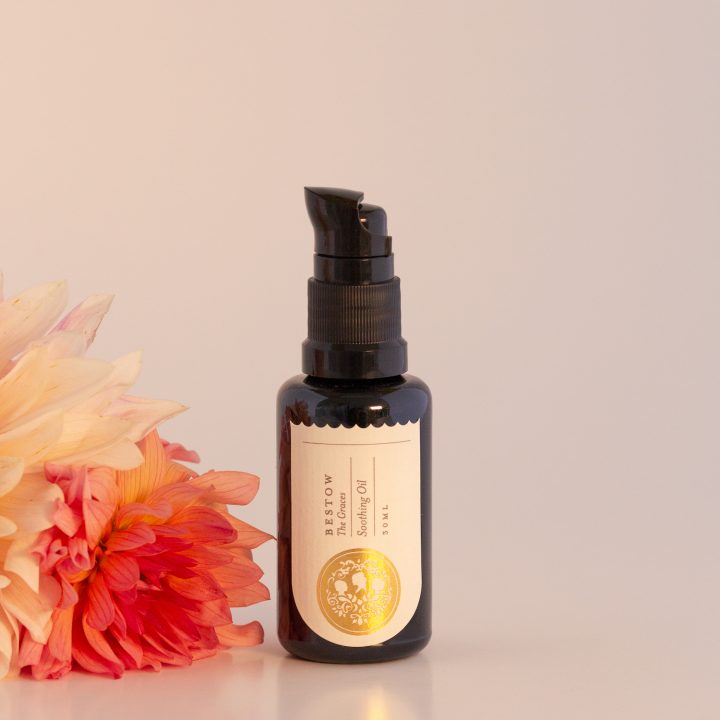 The Graces Soothing Oil is a replenishing oil to soothe and moisturise sensitised skin. It is rich in healing plant oils. These gently nourish the skin and seal in moisture. Improved hydration stimulates enzyme action. This in turn helps to repair and rebuild a damaged skin barrier. 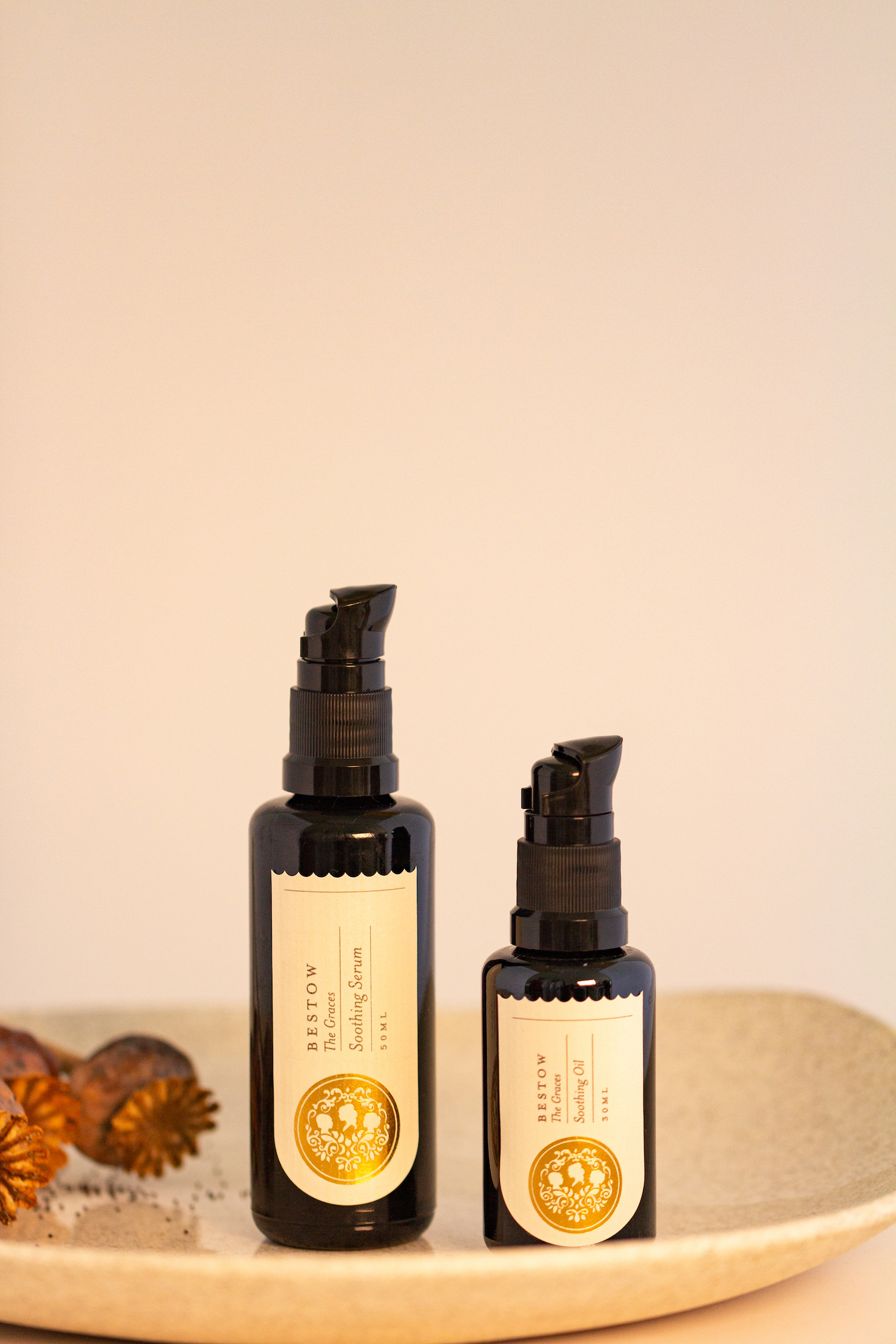 We have created a hydrating and healing routine using The Graces Soothing Duo.

Q. What’s the difference between sensitive and sensitised skin?

Sensitised skin has become reactive because of a compromised skin barrier.  In other words, sensitised skin is a skin state, not a skin type.

People with genetically normal, oily or dry skin types can end up with sensitised skin. How? Through products or treatments that damage the skin barrier – i.e. microdermabrasion, chemical peels, beaded exfoliants and any products containing AHA or DHA.  Sometimes there are internal causes such as nutritional deficiencies or food intolerances.

We developed The Graces Soothing Duo as a first-aid response for sensitised skin. It works to repair and rebuild the skin barrier. This is the foundation for clear, supple, beautiful skin. 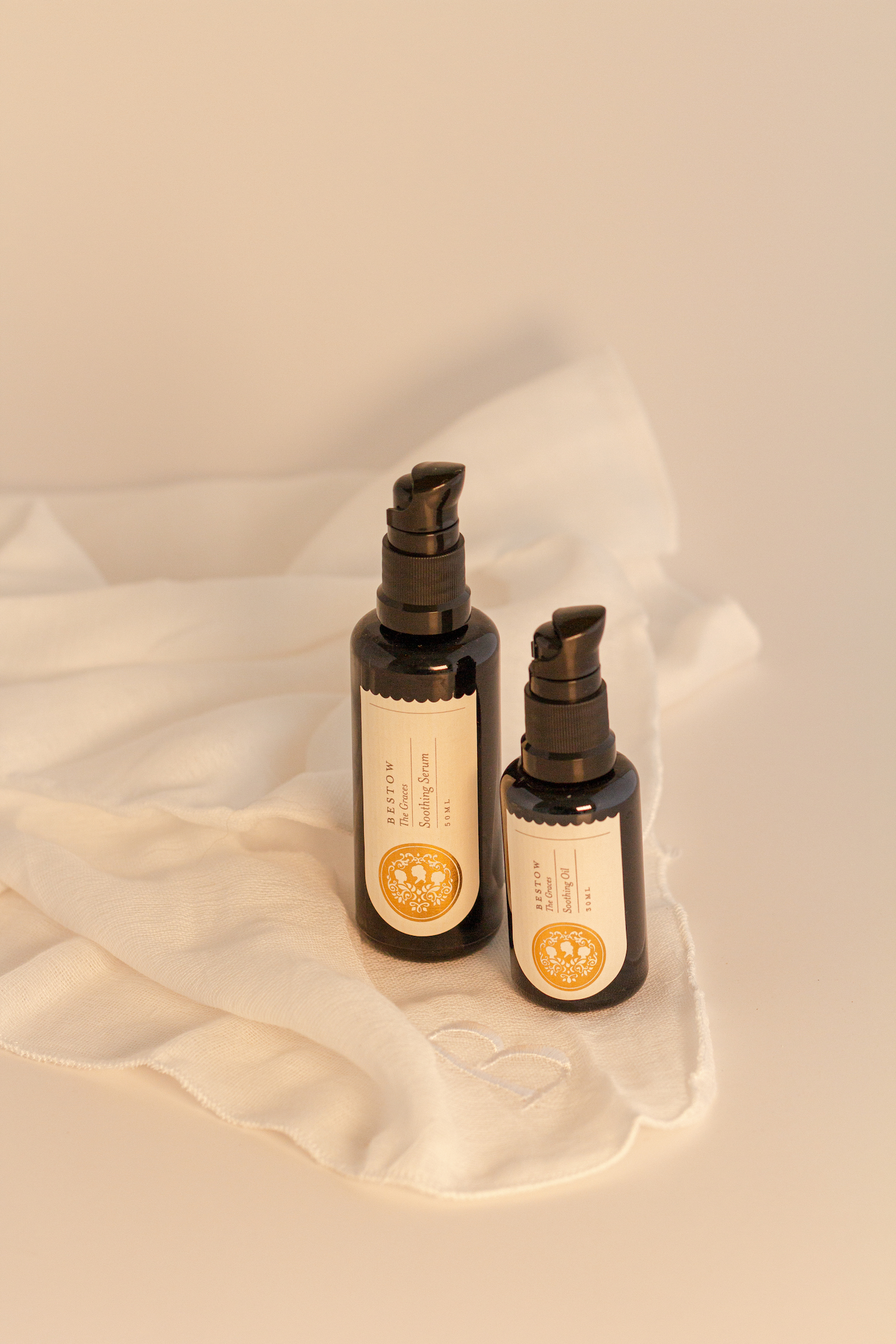 Aja from Wild and Whimsy had struggled with peri-oral dermatitis several times before she came to Jenny Barrow (Holistic Skin Coach) for help. This sensitised skin condition responded well to treatment in her early 20’s.  But after it returned during the pregnancy of her second child, the red inflammation around her mouth and chin persisted for years.

Jenny introduced Aja to The Graces Soothing Duo and routine. She also supported her through the nutritional changes that are needed to repair a compromised skin barrier. Aja’s skin improved slowly, but steadily. As her skin barrier strengthened, skin irritation calmed. Over a six-month period, her skin became clearer, smoother and more supple.

“Thank you so much for the opportunity to experience this skin healing journey. It was truly amazing. My skin became clearer, smoother and there was less redness. The inflammation around my mouth and nose reduced significantly. I have also noticed a big difference in the hydration of my skin.  These changes have had a positive impact on my confidence and wellbeing.” ~ Aja

Lindsay struggled with rosacea for ten years. When the condition flared up, the skin on her nose would become became irritated and inflamed, taking on a reddish-purple colour due to visible capillaries. Despite efforts to treat it, the flare ups kept happening.

She went to see a specialist who told her antibiotics were her only option, that there was no evidence that dietary changes or other strategies would help. Unconvinced, Lindsay went to see Jenny Barrow (Holistic Skin Coach) for help. Jenny introduced her to The Graces Soothing Duo and routine. She also supported her through the nutritional changes that she believed were essential for re-building a healthy skin barrier. Over the next six months, Lindsay’s skin improved significantly. Her skin barrier healed and strengthened. Redness and inflammation in the problem areas were hugely reduced. Overall, her skin became hydrated and smooth.

“I am absolutely blown away by how well my skin is doing. To be honest, I don’t think I ever believed it would be this good. I have covered up my skin with make-up for the last ten years. I love the idea of not wearing make-up. But since the rosacea started flaring up, I’ve never felt like I could. Tonight, when I looked in the mirror, I think I can. Thank you so, so much for this skin journey.” ~ Lindsay

A Note from Jenny:

We are proud to support the Ōtanewainuku Kiwi Trust and their mahi to protect the North Island Brown Kiwi.