ONE PAN CHICKEN AND SAUERKRAUT

Add in the spinach and parsley, stir, simmer for another two minutes and serve.

Want more delicious recipes like this? You’ll find them in The Gut-Skin Connection.

4 medium sized kumara or sweet potato
1 400g can of organic black beans 2 avocados, chopped
1 red onion, diced
8 cherry tomatoes, chopped
Juice and zest of 2 limes
Small handful of fresh coriander, chopped
Pre heat oven to 200 degrees celsius.
Wash the kumara and pat dry. Brush all over with olive oil, place on a baking tray, sprinkle with Himalayan salt and freshly ground black pepper. Bake in the oven till soft – approximately 40 mins.
While the kumara is baking make your salsa. Drain and rinse the can of black beans and place in a bowl. Add all the remaining ingredients except for the lime zest. Mix gently then season with salt and pepper.
When your kumara is cooked, remove from the oven and allow to cool for a few minutes. Slice through the centre lengthwise but don’t cut right through the bottom. Fill each kumara with spoonfuls of salsa, dress with tahini dressing, garnish with lemon zest and serve. Serves four.

1⁄4 cup of tahini paste
1⁄4 cup of water
1 tablespoon of olive oil
1 tablespoon of Bestow Beauty Oil Juice of one lemon
1 teaspoon of Dijon mustard
1 teaspoon of honey
1 clove of garlic, crushed
Blend all the above ingredients with a stick blender. Store in a jar in the fridge for several days.
One cup of kumara (sweet potato) contains a whopping 38,433 IU
of the plant version of vitamin A. This is over seven times your daily recommended requirement. They are also rich in vitamin c, many of the b vitamins and lots of minerals. What an amazing skin food they are! And don’t forget all the fibre you will get from this dish with the addition of the black beans. 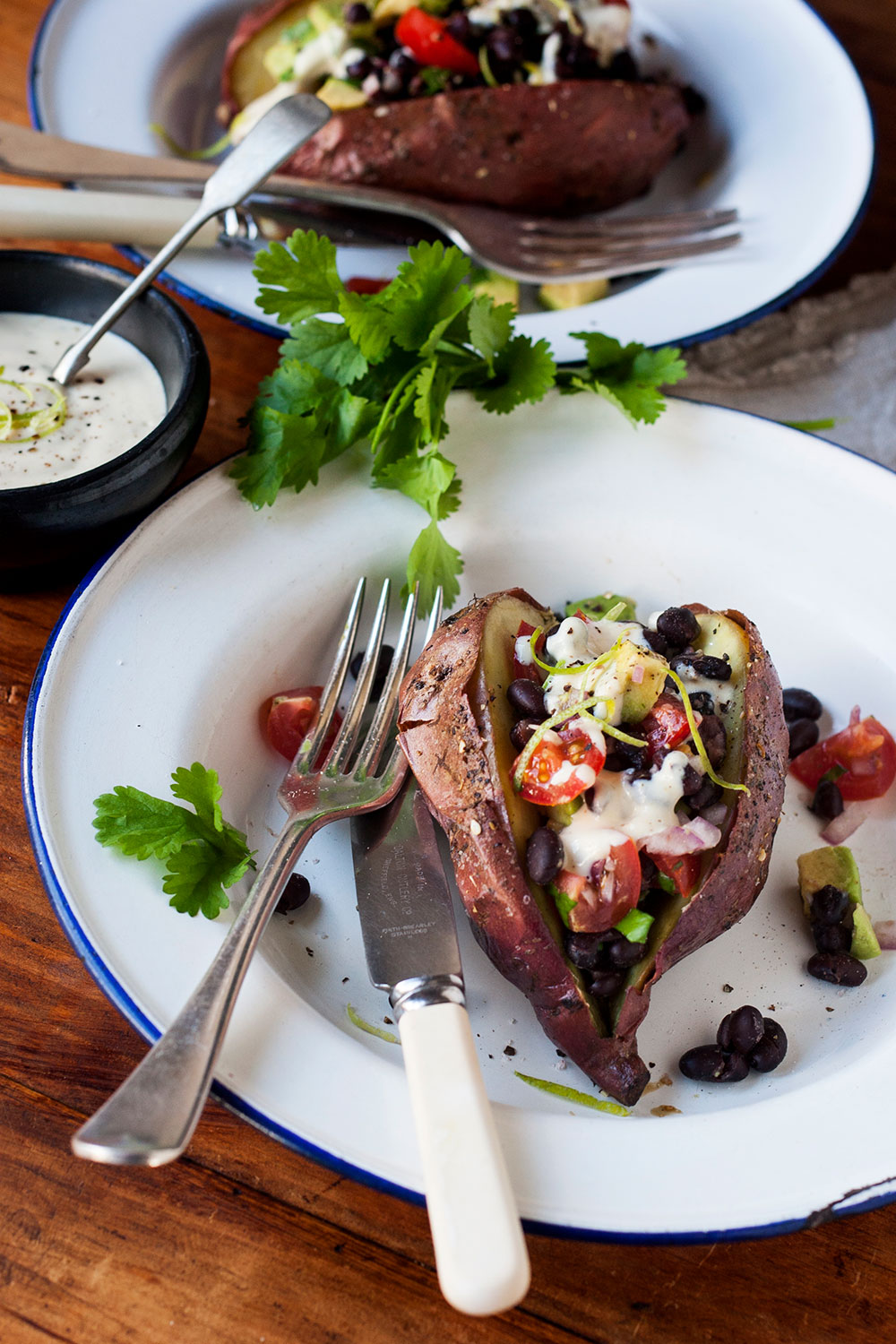 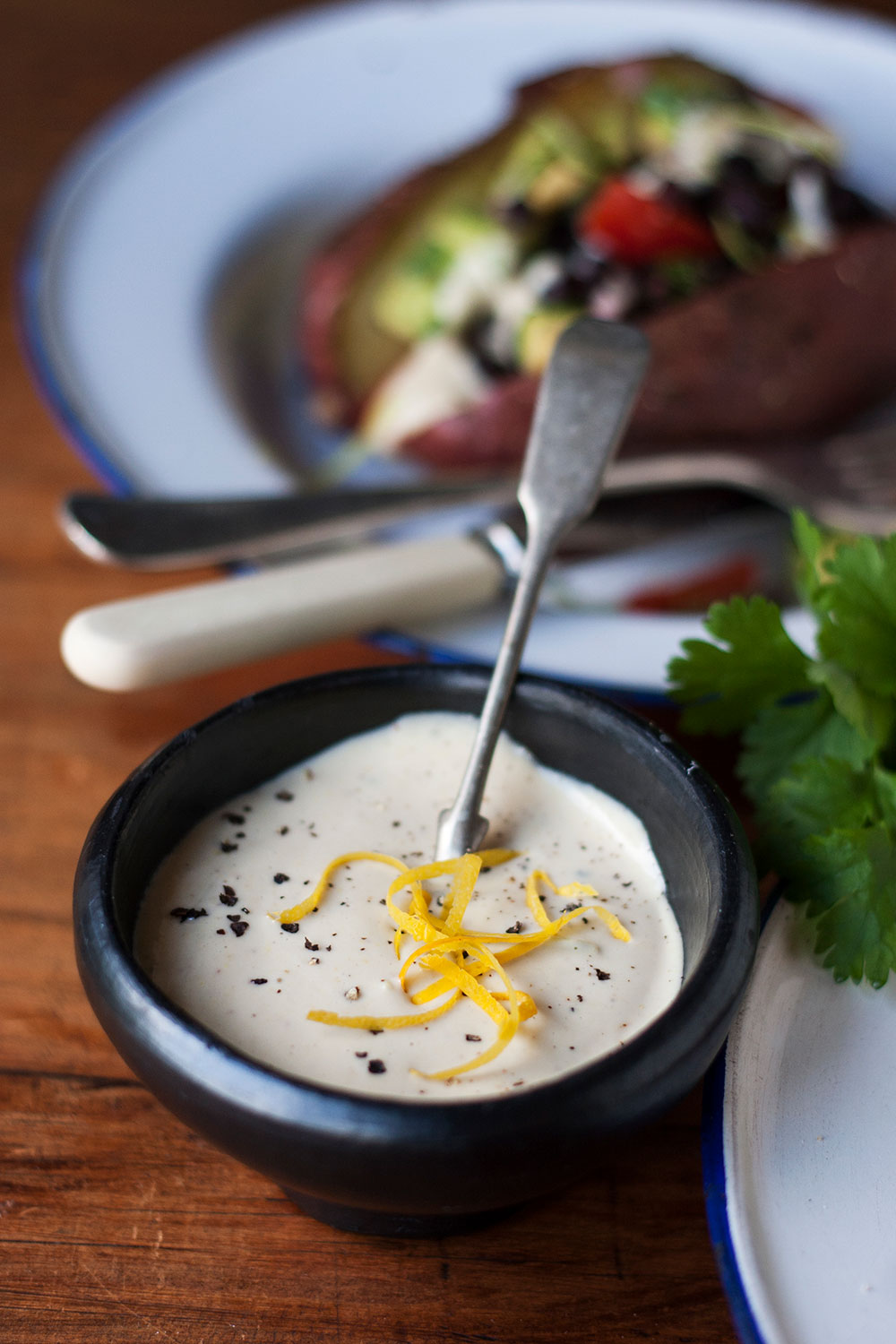 This is very tasty and healthy and definitely worth a try even if you are not a chickpea fan.

Heat butter in a large pan, add onions, celery, carrot, garlic and ginger. Sweat until the onions are soft. Add spices, drained chickpeas and tomatoes. Keep cooking until you have the consistency you require. The final mixture should be moist but not wet. To vary this recipe, you can add any steamed vegetables you wish (i.e. cauliflower, broccoli). Remove from the heat and stir in the Bestow Beauty Oil. Season, sprinkle with fresh coriander and serve. 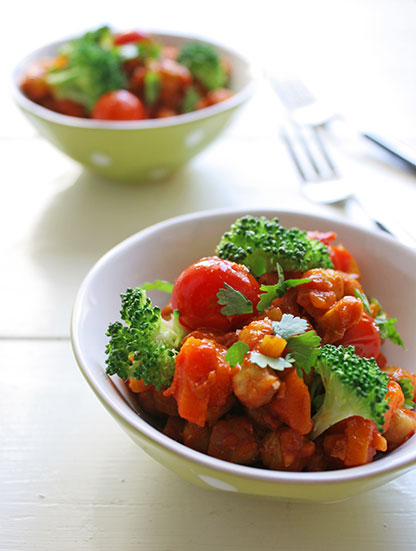 DIRECTIONS
Sweat pearl barley, onions and garlic in cooking oil. Add chicken stock, water and zest. Bring to the boil, turn down to simmer, place chicken breasts on top of pearl barley and cover with a lid. Simmer chicken until cooked. Remove chicken and recover pot with lid and cook until the barley is soft and liquid reduced. When cooked, place barley in a bowl, cool, then add sundried tomatoes, chopped parsley, sliced chicken, Bestow Beauty Oil and lemon juice. Season and serve. Serve warm or cold. 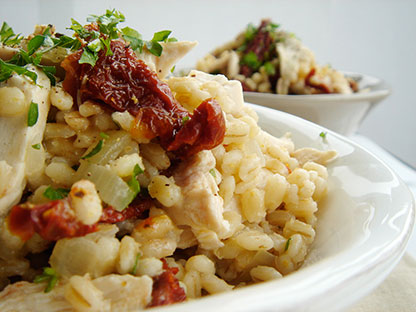 This ancient Peruvian seed is said to be the ‘Queen of the Grains’. The Incas considered it to be sacred and called it ‘the mother grain’. It was believed to be a life-giving seed and legend says it was delivered from the heavens by a sacred bird.

Bring the quinoa mix to the boil in 3 cups of water, simmer till cooked approx 10-15 mins. Strain and fluff up with a fork. Allow to cool a little. Fry the sliced haloumi in a tablespoon of olive oil until golden brown, set aside. Blanch the beans in boiling water then rinse in cold water. Place all the ingredients into a large bowl and mix.

Place all the dressing ingredients into a small jar and shake to mix. Pour over the quinoa salad and serve.

*An organic quinoa is preferred such as the Ceres organics brand. 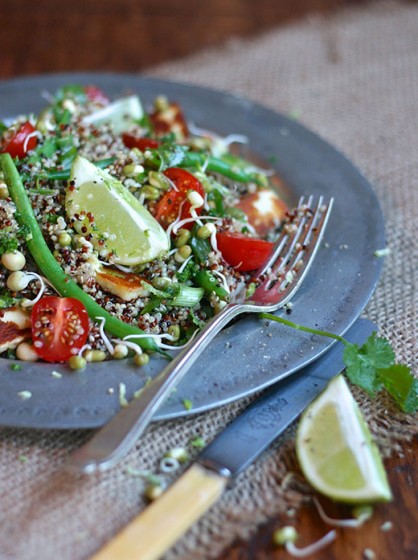 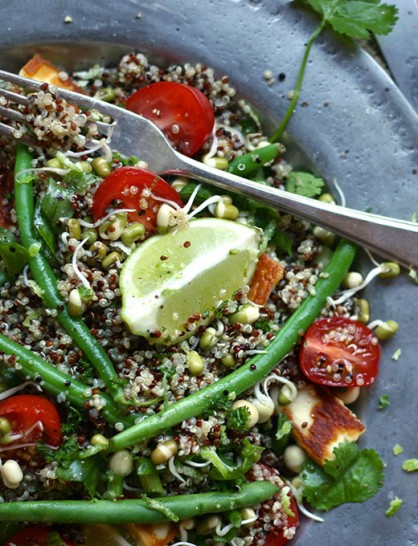